It’s just like the first time, as if  I’m back to square one once again. Roarke and his teething pains, well, let’s just say is putting my commitment to breastfeed to the test once again.

I admit now that, at first, I chose to breastfeed for selfish reasons. I was after it’s promise to get you back to your pre-pregnancy weight in just a matter of weeks. Imagine!
So there I was, enjoying food to my heart’s content since it was the inevitable c-section for me. I watched what I ate, of course, knowing that there were certain kinds of food that could be harmful to the growing baby in utero – but I didn’t watch my weight. I was going to breastfeed after all, so I believed I was going to shed the pounds in no time
I bought all the props – breast pump, breast pads, nursing bras, sterilized milk bags,  Lansinoh, nipple shell, nipple cover, nursing cover – the works!
What i forgot to prepare was – myself.
I thought breastfeeding was as natural as can be. I saw women all over do it and I never heard any one of them complain or at least say it was a challenge. I even saw my mom breastfeed my youngest sister and I certainly didn’t hear any complaints from her. So I thought breastfeeding was just easy-peasy. I was so under that delusion that every time I do my research on how best to take care of a baby, I always stopped reading when it comes to the breastfeeding part. I mean, what more do I need to know. You offer your breast to your baby when he’s hungry, he sucks on it till he fills up his little tummy and all is well and good. Easy-peasy.
How wrong I was!
I learned a little too late that in order to breastfeed successfully, you have to know how to correctly latch a baby. Then there’s the issue about low milk supply, building up milk supply, maintaining milk supply, forceful let-down and oversupply. And wait, there’s more. Deciphering nursing cues, nipple confusion, sore nipples, dry and cracked nipples, and worse yet, bleeding nipples barely covers it. I was scrambling for information, for solutions. Instead of taking advantage of Roarke’s nap time to sleep myself and have that much-needed rest, I was on the net researching until my eyes blur out or Roarke wakes up to feed again.
Breastfeeding is not easy-peasy!
But it could have been if I was just prepared, if i knew what to expect. Or I’d like to think so. I’ve read many times over that no matter how much you think you are prepared, you are never really prepared enough when the day comes. Still, I would not have been too surprised like I was or at a loss on what to do or how to cope when the challenges arose. I could kick myself for being so assuming. I certainly paid for it. Sleep or rest time was the precious commodity I had to pay.
Through it all I now have a new meaning for breastfeeding. Yes, it is the best food you could give your child with it being complete in nutrients etc. Yes, it definitely is liquid gold. But for me, it has become more than that. Breastfeeding is COMMITMENT and PERSEVERANCE.
Why I bothered? Love. And the desire to give the best to my baby. Also because only I can give it to him, so I did. Motherhood can change selfish persons to – martyrs? No. Motherhood simply changes you for the better. So I committed.
I struggled to learn, to be informed. I had to battle my insecurities about my milk supply in the midst of people telling me that maybe I don’t have enough, backtracking a little when I had too much. I dealt with the challenges of breastfeeding in public and catching up with a greedy baby boy. I persisted through sore, cracked and bleeding nipples, all in all feeling like a milking cow on call 24/7. But I persevered.
Was it worth it?  Yes! A thousand times yes.  No sacrifice is too great when you create that special bond between you and your baby. It’s priceless.
My weight, you might ask? Well, I wasn’t lucky enough to have shed it in just a few weeks. Though I’ve read too that others actually did. I actually forgot that I was putting on weight before I got pregnant so my supposed to be pre-pregnancy weight was actually on the heavy side. Hardy har har. I didn’t mind. Actually, I did. But as of now, ten months later, things are a little bit better.
Fast forward to today. With Roarke’s teething pains drawing blood every now and then – again – and intentionally or unintentionally made worse because of his nursing acrobatics, I just have to remember two things: commitment and perseverance.
Life is beautiful!
P.S. Here are some photos to tickle your fancy.

This is Roarke the day I brought him home from the hospital. Yep, that’s a regular-sized cloth diaper. 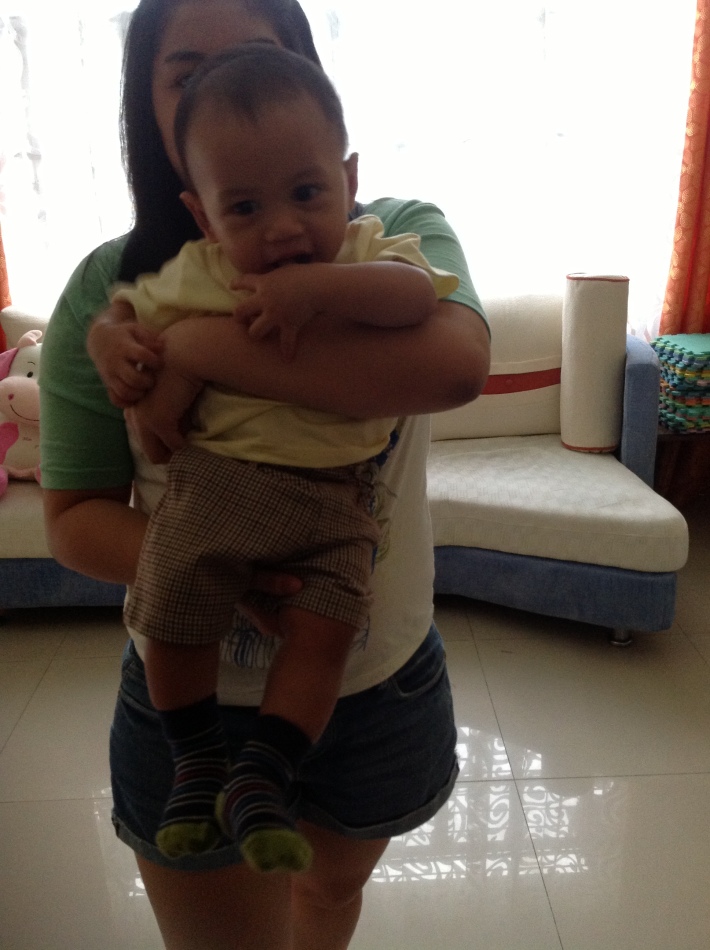 And nope, that’s not my legs.
Life is beautiful!

One would think I wasn’t serious with this whole blogging thing because I am not doing posts as often as need be. Believe me, I am. I just had issues to settle first, Roarke who prefers me over his yaya, office deadlines and the occasional drama.

But i have time now as I find myself wide awake while Roarke sleeps soundly beside me. I better do this quick though before Roarke wakes up and sleepily climbs on top of me so he can lay his head where my heart is and goes back to sleep again. He usually does this around this time. I am not complaining though. Us sleeping like that wrapped in each others arms is one of the most beautiful things in the world and what makes motherhood worthwhile.
Anyway, on to the post. (Am I not posting already? Hehehe)
I had a profound moment today. I stumbled upon a blog post that put into words the emotions I have been carrying inside my heart ever since I gave birth and held Roarke in my arms.
She wrote, “… I felt the Lord’s call to prioritize building my family.”
It hit me. Because I knew it was more than just my desires and longing to personally take care of my son. To want to be physically and emotionally there for him, witnessing his milestones, giving him all the attention and love he needs. It was a calling.
There is divine intervention at play.
I have always felt that I was not meant for religious life, despite certain offers, because I knew deep in my heart I was meant to be a mother. That the reason for my existence and what I would count as my greatest achievement is if I raise my son, or children, the way God wants them or intended them to be. I am not perfect. Far from it. I am a first time mom, therefore, inexperienced. There are times I wonder if what I am doing is right. I worry, and worry and worry. But i just pray that at the end of the day I do right by him – by Roarke and by God.
This is a long road yet to travel and many changes and choices to make so i can heed that calling. But God has been there every step of the way. In every moment of doubt, fear, and soul-searching for answers and clarity. He has been there opening windows and doors and giving answers that settles easily in the heart. What more can you do but heed that call.
Now i pray for courage, for belief in myself for what I am and can be. I’ve been praying for the understanding of the people that matters most to me but maybe I also need more understanding of myself so that when I fall down, I can pick myself up again.
I know what I’m meant to do. I just need to do it. Everything is actually falling into place. That’s God’s work.
But the problem yet is me. Scaredy-cat me. But I’m getting there. By God’s grace, I’ll get there.
Let me end this post by sharing this excerpt I read.

So it seems that this is up and running. I guess it is only right that I introduce myself first before I blast you with the stories of my life.

Hi! My name is Nenen. Actually, the world knows me as Mae but my family calls me Nenen. Yes, my nickname. And since you’re going to know more about me as time goes on, given that you read my blog of course, you might as well call me Nenen too.

As you’ve guessed, I’m a first time blogger. I’m officially in my thirties since i celebrated my 31st birthday – no denying that now. I’m a first-time mom, a wife, a daughter, a sister, a friend.

This is Roarke, my precious. Isn’t he the cutest?! He is the reason for this blog. Almost everything you will read here will be about him. Others will be about, well, me and everything else about life in general. About being a mom, a wife, a daughter, a sister, a friend – just about every role a woman has to play to make the world go round. Thus the title, HatsOnNenen. Oh, by the way, that’s me holding on to my precious. Just had my hair cut. Looks nice, eh.

So, I do promise to make this blog as entertaining as possible. At least, it will be worth your while and deserving enough of the time and effort you spent to visit us. I owe you that much after all. So make yourself comfortable, enjoy, and please don’t forget to cheer me on.

“You have brains in your head.
You have feet in your shoes.
You can steer yourself any direction you choose.
You’re on your own.
And you know what you know.
And YOU are the one who’ll decide where to go….”
– Dr. Seuss, Oh the places you’ll go.

Playing the real-life roles while striving for that elusive balance.